Consumer Media Platform Preferences in 2020 among Indian and Singaporean Consumers 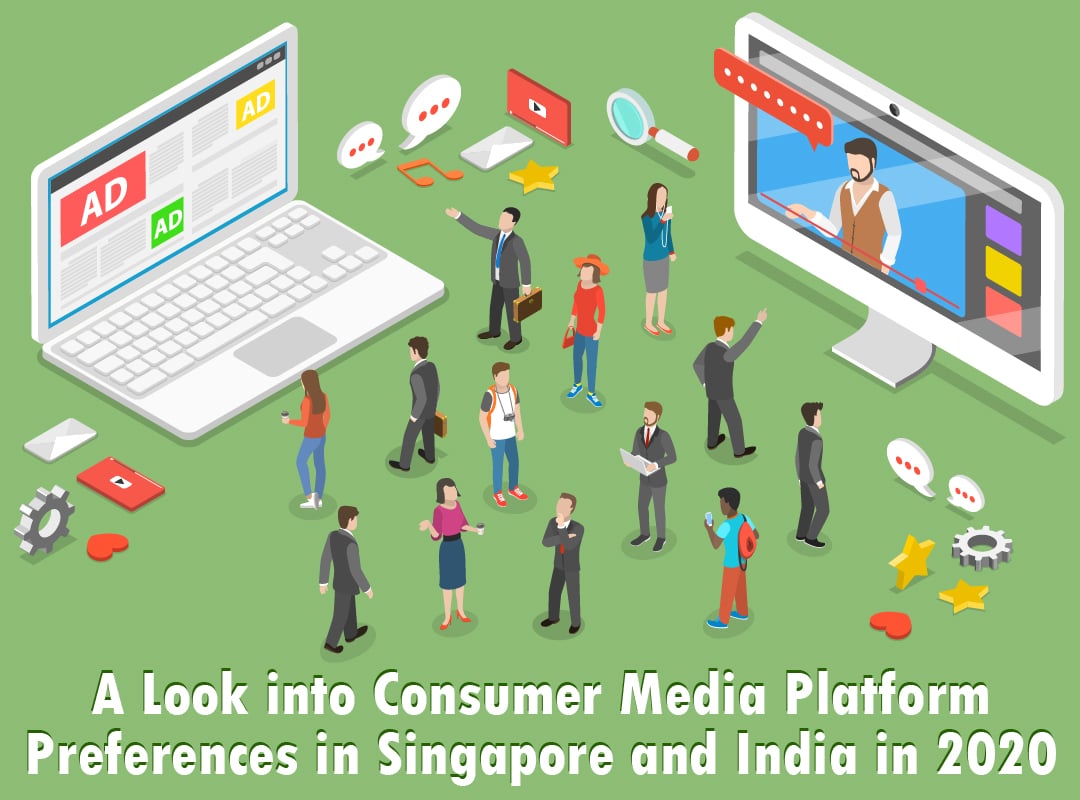 The year 2020 has been an anomaly in all senses. This also applies to people’s interaction with various media platforms, both digital and traditional. The fact that for the first time a large section of the global population is spending a lot more time indoors compared to before most likely has had an impact on how we are consuming advertisements and other product and brand messaging.

To explore this further, Borderless Access recently conducted an online study using its proprietary digital panels among audiences aged 24 to 60 in several key global economies. The study aimed to shed light on, among other things, which media platforms consumers have been more exposed to during the pandemic, which platforms garner the most trust and the effectiveness of channels of brand communication. The study also explores how traditional and digital media perform against each other in this time of the pandemic.

In this report, we are focussing on the findings from Singapore and India and compare them against the global outcome of the study.

Media platforms with the greatest exposure during the pandemic 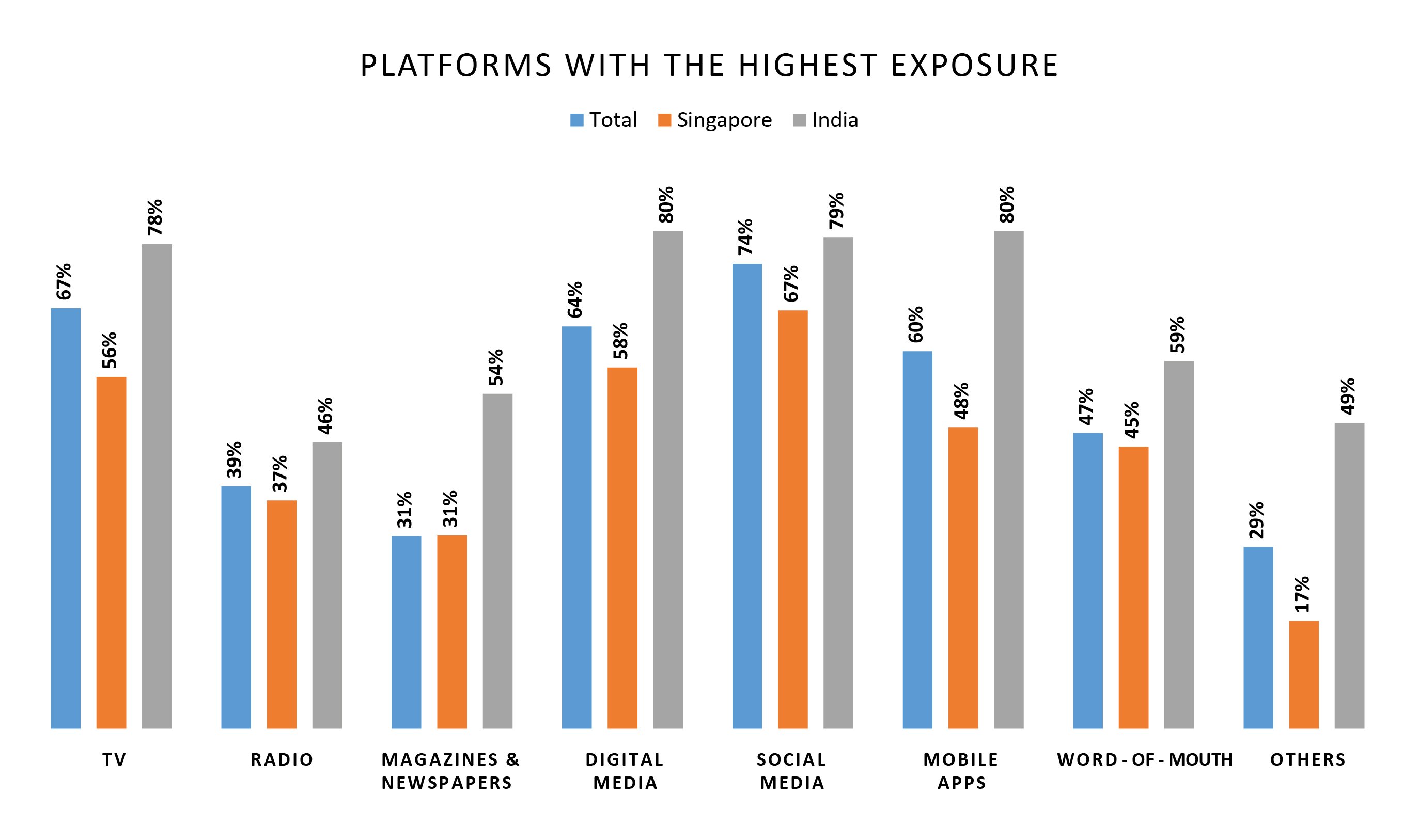 Indian audience preferences, in terms of channels of media, is more consistent with the global audience, with strong leanings towards digital and social as well as television. Singapore audience, on the other hand, lean more towards social media, along with digital media.

Notably, a significant percentage of audience in India also choose word-of-mouth, print media and radio as common channels through which they were exposed to brand messaging.

Platforms most trusted by consumers

While certain media platforms get more eyeballs compared to others, ultimately, audience trust in these platforms determine the chances of favourable outcome. Our study revealed that television as a platform is most trusted by Indian audiences. 73% of Indian consumers choose television, followed closely by digital media and physical newspapers/magazines and mobile apps. 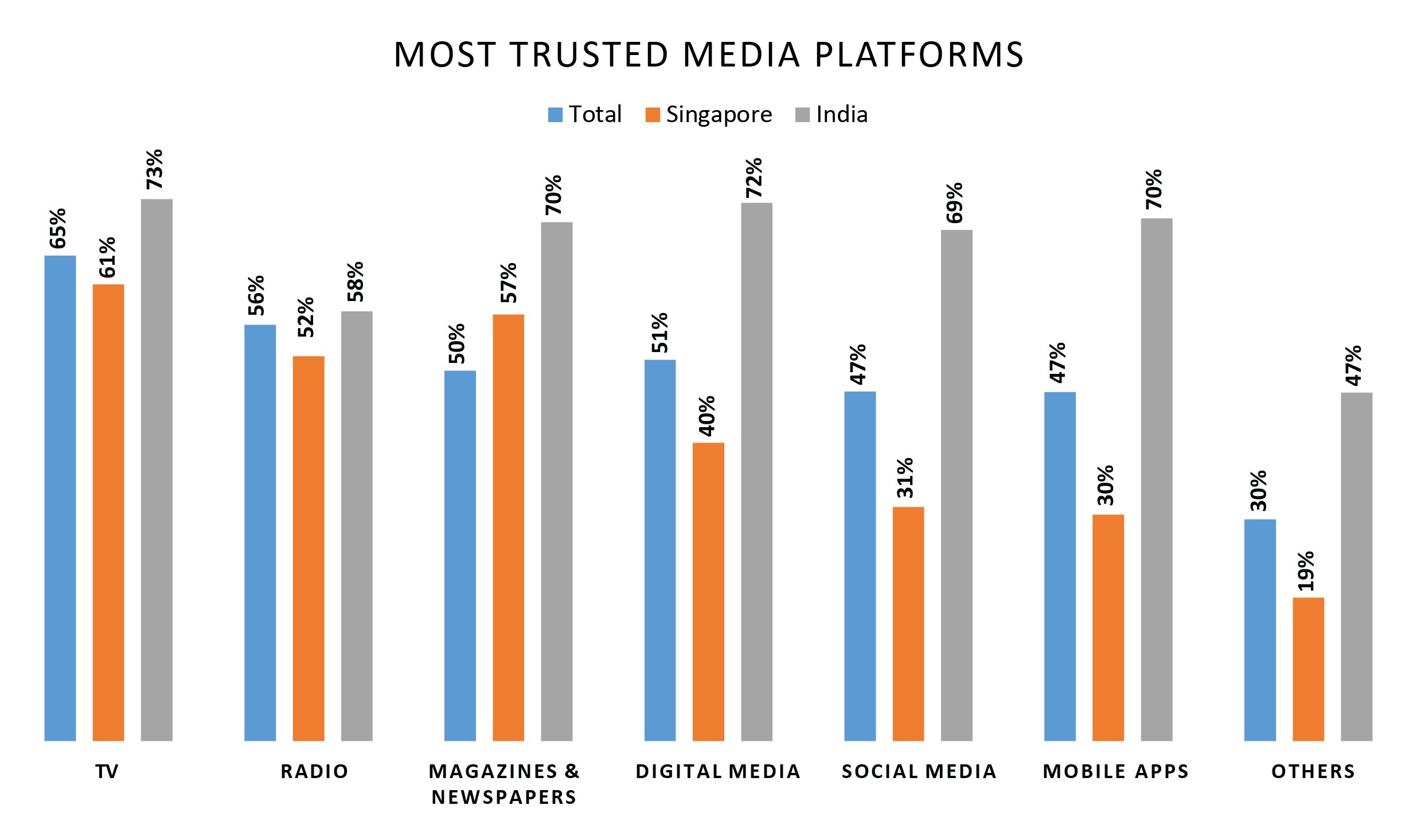 In Singapore too the highest percentage of audiences claimed they trusted brand messaging shown on television the most. Interestingly, Singaporean consumers trust ads on the radio more than those they are exposed to on digital and social media and mobile apps.

Media platforms as sources of news

Globally, television comes across as the most trusted medium for consuming news. The same is true in both Singapore and India, where 65% and 80% of the audience picked television as their most trusted source of news. In India, this was followed by digital media as well as news apps. Print and social media were picked as a reliable source of news by an equal percentage of people. 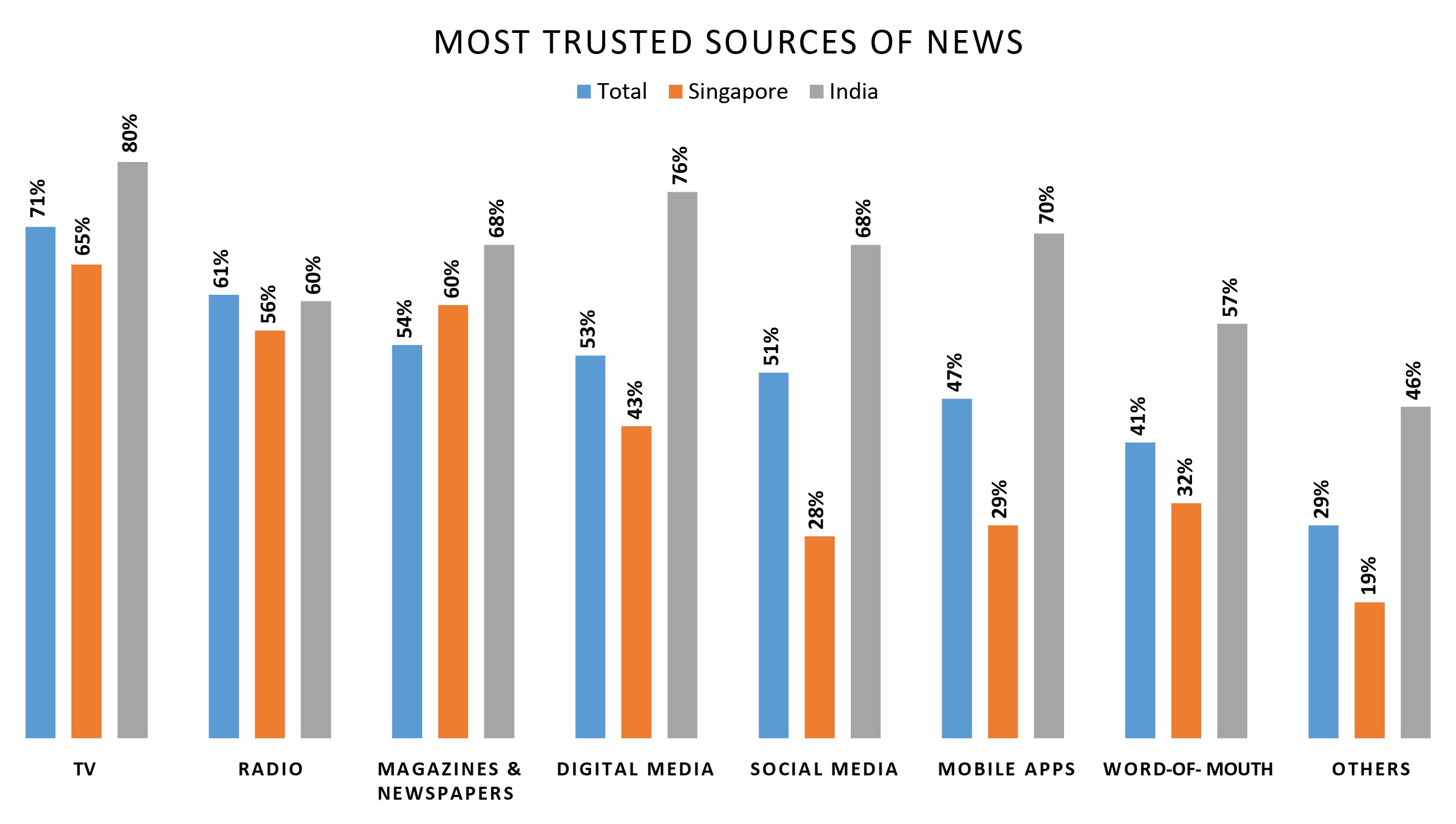 In Singapore, print media came in after television, followed by radio (picked by 60% and 56% respectively). Interestingly, only 28% of people picked social media as a trustworthy source of news, ranking even lower than word-of-mouth.

To find out if the media platforms have had an impact on the effectiveness of ads, we asked our audience if they had made purchase decisions after being exposed to a brand communication on specific media platforms.

In an ideal world, traditional and digital media would go hand in hand, to complement each other to deliver maximum marketing impact. Globally, the majority of audiences feel the same way, with 37% saying they would like to be able to rely on both forms of media. The same sentiment was shared by 45% of Singaporeans, a majority. On the contrary, 40% of Indians said they trust digital media more than print media. 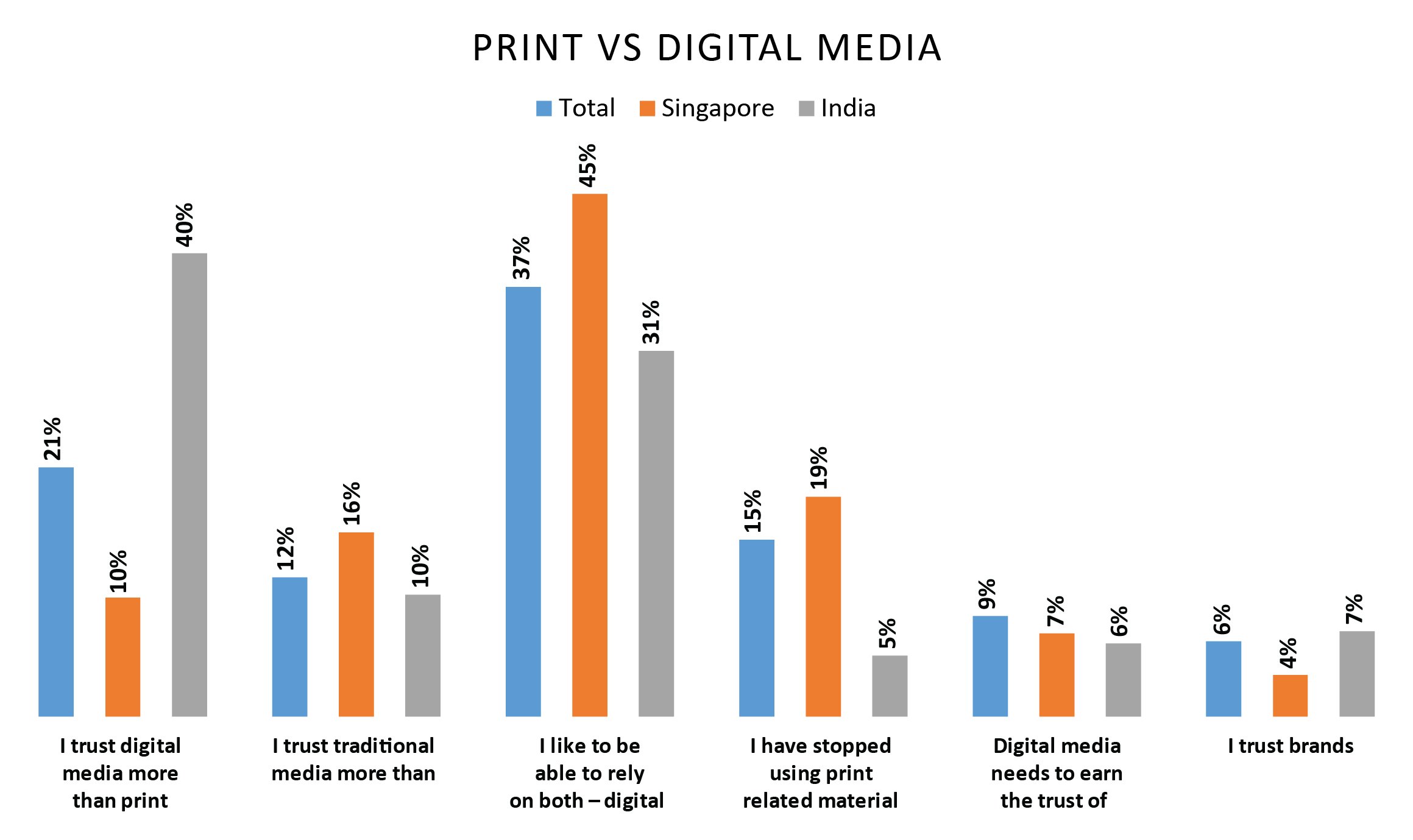 Ironically, print media has been losing ground in both countries, and in India, the pandemic has accelerated the process with 89% of Singaporeans stating they had stopped using print media even before the pandemic. Whereas, for 60% of Indians the same is true since the pandemic. 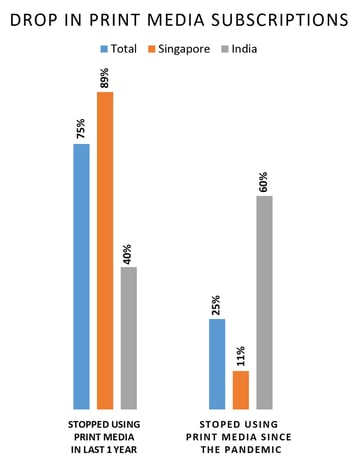 There is no denying that traditional media has been losing ground to digital media and this has exacerbated since the start of the pandemic. However, we see from the study that traditional media, including print and television, are still effective in connecting with consumers, in influencing purchase decisions for instance and most importantly, win against digital/social media in terms of the trust factor.

Television, in particular, is still highly relevant in both countries as a platform for brand promotion, where it receives extensive audience exposure and act as a credible source of information as well as news. In fact, the study reveals that ads and brand messaging on television perform slightly better than social and digital media. Even print media, which has seen a sharp decline in consumption in recent years and more so since the beginning of this year, cannot be completely ignored by marketers as they continue to be a trusted source of information and news, particularly in India.
Even as digital and social media continue to dominate our lives, traditional media is still holding ground as of now but the tides are shifting.