As digitization makes its way into Africa across sectors and industries, digital payment methods are being offered as safe and convenient alternatives to traditional options.

It is important to note that this study was conducted just before the lockdown was implemented in any of these countries, the results indicate a long term trend, rather than being skewed by the unusual spending behaviour of the past few weeks.

Not surprisingly, the most common forms of payment amongst LSM 4-10 South Africans are credit/ debit cards and cash, with three-quarters of people also using online banking and banking apps. Other (non-bank) apps and mobile money are only used by 19% of the population, and 29% claim to use other forms of e-wallet. 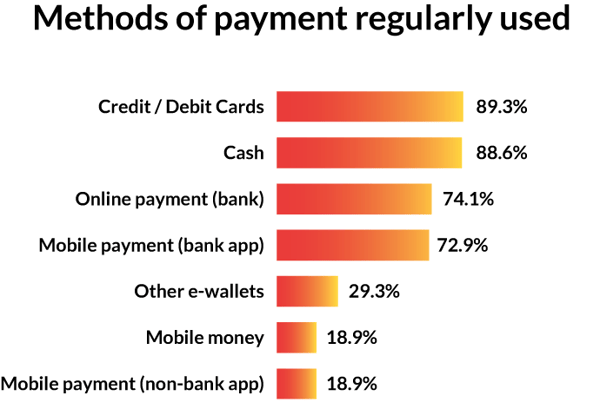 South Africans use banking apps mainly to transfer money within the country and to pay utilities or bills. Non-banking apps are used much less, and predominantly for shopping online. Likewise, mobile money is used by a very small percent of the population, and mostly for in-store purchases or international money transfers.

The only non-bank digital option where South Africans show a higher incidence than other countries is e-wallet usage. This method is used for transferring money (both locally and across borders) as well as for online purchases.

The only mobile method to see an increase in South Africa in the past year is mobile bank apps, with 53% more people using these than before. Non-bank digital options, which were already not high, have declined in the past year.

Online banking has seen an increase in local usage, while the use of cash has decreased. This trend is driven primarily by convenience, followed by safety concerns over carrying cash. 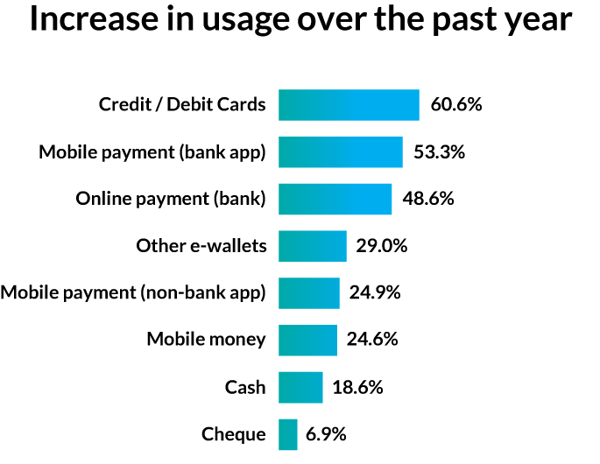 South African consumers have a high level of trust in their banks… they perceive them as safe and secure, much more than they do the various mobile money providers. In fact the only three payment app services that South Africans claim to use at all are Flutterwave, Virgin Money Spot and the Karri/ Fundi apps for school payments. 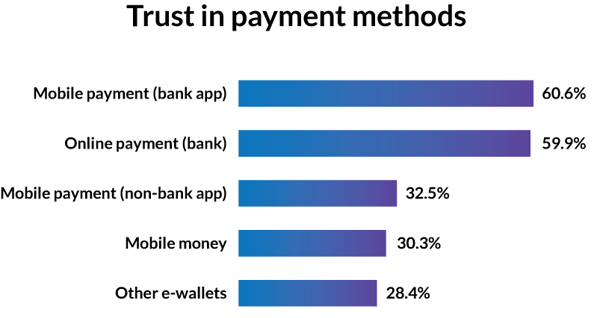 The main reason people for not using payment apps is that they are concerned about security in integrating these apps with their bank accounts. This poses an evident incongruity: People have high levels of trust in their banks but low levels of trust in how mobile money apps link to them. Local banks have gained trust through heritage and reputation, and South Africans want to see more assurance from other digital options that they can provide the same.

This is vastly different in the other African countries surveyed, where consumers were introduced to mobile money apps and digital banking at similar times, thereby gaining similar levels of trust in them.

Another reason why South Africans choose not to use non-bank digital options is that they are perceived as not being widely accepted, which naturally lowers their appeal. 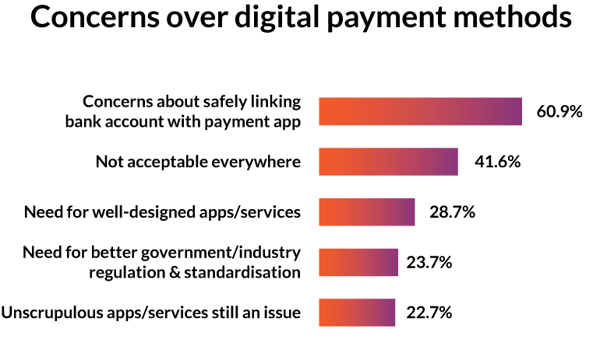 This indicates an opportunity for all non-bank digital options to instil a sense of security in consumers about the process of linking to their bank accounts, possibly partnering with banks or leveraging off the inherent trust in them.

At this stage there is still a very low claimed likelihood of adoption of digital payment methods in the next year. One way in which this may change is with the increased focus of targeting South Africa’s unbanked population, who have a higher propensity towards adoption. Another is of course due to new consumer behaviour patterns post-lockdown, as we see the country leapfrogging to embrace digital alternatives across sectors.

Contact us if you would like to know more about consumers' spending habits in South Africa and other African nations or gain other niche insights.