The South African economy has been struggling for a while now, with its recovery further hampered by the country’s acute energy shortages and resultant load shedding. President Cyril Ramaphosa, in his 2020 State of the Nation Address, was candid about the prolonged economic slump, stating, “Our economy has not grown at any meaningful rate for over a decade”. He stated unequivocally that the load shedding was having a “debilitating” effect on the country.

While the speech was an honest admittance of the challenges faced by the country, he also mentioned various positive measures that the government and civil society are taking to bring citizens’ lives back on track. However, it remains an unfortunate fact that the halt in economic growth will not be resolved overnight. And the sentiments of the people reflect this.

The impact on employment

In order to understand the sentiments of South African consumers, professionals, and business decision-makers about the economic scenario, Borderless Access recently conducted a study. It revealed that only 30% of the respondents had an optimistic view of the country’s economic situation taking a turn for the better within this year.

Are citizens apprehensive about the economy ↓ 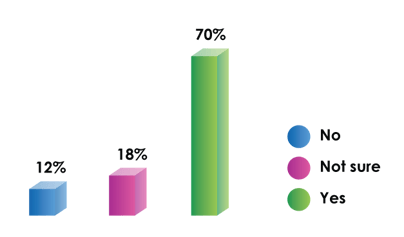 Adding to this, the rate of unemployment is predicted to go up further. According to the government, two-thirds of the 1.2 million people entering the labour market each year do not find employment or receive further training.

On the power front, ESKOM has tripled the cost of electricity in the last decade to service its debts as well as maintain its infrastructure but continues to struggle financially and functionally. The resulting power cuts have taken a toll on people’s earnings.

When asked if the frequent power cuts had negatively impacted their earnings either directly or indirectly, about 57% answered that they had.

Impact of power cuts on income ↑

The response to the spike in expenses

The financial impact of the power situation, combined with rising living costs resulting from the economic instability, has resulted in a shift in the spending pattern of the average person - also evident in our earlier study on consumer spending patterns of South Africa.

While the cost of electricity and fuel has seen the steepest hike, fruits (8.7% YoY, 2019-20) and bread and cereals (6% YoY, 2019-20) also show some of the highest inflation rates, according to Statistics South Africa (SSA).

As per our survey, the majority response (from approximately 81% of consumers) has been to either reduce spending on such essentials items or switch to more affordable brands or products.

Economic uncertainty always tends to drive people to spend less. This trend was observed in our survey, which revealed around 51% of people had postponed or cancelled large spending plans such as buying a car, purchasing a house or spending on fine jewellery.

Changes in plans for large spending or major purchases ↑

Apart from the financial impacts, the other significant hardship faced by some citizens is the shortage of drinking water. This peaked in 2018 due to a country-wide drought, but is still occurring in certain isolated areas as a direct result of power shortages.

On hardships resulting from power cuts ↑

On a positive note, the government is making a significant push towards alternative energy sources to compensate for the shortcomings in traditional energy production. This includes the development of additional grid capacity from coal as well as natural gas, hydropower, and battery storage.

The government is also encouraging small-scale power generation for personal use, which is boosting the adoption of solar power panels by individuals. Energy utilisation from existing wind and solar plants is also set to get a significant boost.

How these measures pan out and help push South Africa back on the road to economic recovery still remains to be seen.

Need actionable insights from the African market? Contact Us >>